Are Beyonce and the Golden Globe awards “overly feminist”? 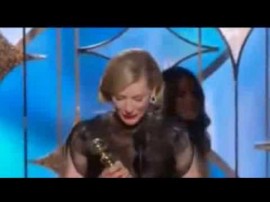 Can you believe we are still talking about this in 2014?

I want to comment on the Golden Globes awards, because there’s something striking about feminism today. It’s finally feminine.

In some ways, growing up, many of us were trained to be man-like, in order to compete in a man’s world. That wave of feminism was confrontational and competitive. There were good guys and bad guys, winners and losers.

As women we paid a high price for that kind of confrontational feminism.

Face it guys, you aren’t doing a fabulous job of taking care of our world.

When I started as chapter chairperson of Digital Eve, about 15 years ago, one of the biggest areas of focus was making sure that we had no competitive or aggressive behavior. At that time, the organization was known as one of the most amicable professional women’s organizations out there – because we insisted on a culture of helpfulness and warmth. That’s the sisterhood.

At the Golden Globe awards, it was obvious that the sisterhood is now mainstream. It is mainstream to support one another and to truly understand that competitive and dog-eat-dog behavior damages all of us.

I’d be remiss if I spoke about movies without mentioning one of our favorite heroines, Katniss Everdeen. She is a woman in a man’s role, but for once, the author shows the toll on her psyche. She takes the role as a protector of her family, but ultimately the psychological pressure gets to her.

On a personal level, I myself have evolved over this time to become conscious of how damaging it’s been to me professionally, emotionally, and physically to try to keep up with the boys. It’s my hope that our children will find both masculine and feminine forms of expression that are healthy and let every individual find his own self-expression.

For me, the first step is creating Purple and Nine.

What are you doing to create healthy gender roles for your family and community? Do you think that the celebrities are taking this too far or not far enough?

Tell us in the comments below.