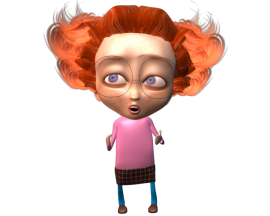 Some people have implied that Nine looks suspiciously like our CEO, but that’s, of course, ridiculous. She acts a bit like Rebecca, in that she’s somewhat oblivious to what other people think of her behavior, but I didn’t write the scripts, so that has absolutely nothing to do with me.

With Nine, we wanted to get a very real skin texture, with freckles and the whole deal. As I mentioned in the previous post on Creating Purple, we took certain shortcuts and broke some of the rules for 3D animation, but with the skin tone we didn’t cut any corners.

Because we chose simplified bodies, we knew that most of the expressiveness of the characters would come through their facial expressions. The heads are oversized, which gives them a bit of a bobble-head look, and kids have responded very well to that.

The eyes are very large, and we’ve put a lot of expression in their eyes. Purple and Nine both give quite a few sarcastic glances to one another. Nine comes with a built-in sense of adventure and wonder, so big eyes were clearly the right direction.

At the same time we were insistent on making them bit and curious eyes, rather than big and sexy eyes like you see on some of the characters today. (Editor’s note: “Some” and “today” are Ofer’s nice way of saying everybody has been doing the same thing for year. Boooring.)

In fact, Nine has no eyelashes at all. That gives her a look of wonder and excitement, and the smooth lines keep her very sweet and sensitive, and the realistic skin tone makes her relatable. Again, there was a balancing act.

The big eyes can sometimes make characters look like aliens. We wanted weird and wonderful, not weird and creepy. It’s a very fine line.

You get a real sense of how special the characters are when you look at the silhouettes, as we have in the video “Who are Purple and Nine®?” They are so special, even the silhouettes are trademarked.

The one area that is sometimes limiting is that the girls have very small mouths, so that part of the face is not always as expressive as it would be in a more classic animation.

Small mouths are a huge advantage for dubbing, of course. We wanted to reach as many girls as possible with these characters. Going in, Miriam and Rebecca had already made the decision to translate to Chinese and Spanish. We knew the priority was reaching as many kids as possible, so the simplified mouths proved to be an advantage for that.

The large heads and small bodies give a puppet-like effect, which is fun and different. It’s a huge deviation from the world of 3D animation, where it’s a bit of a competition to see who can make the animation “as good as” Disney or Pixar, or according to those classic standards that we hold up as the “ideal”. We aren’t trying to be ideal, or as good as someone else, we just want to be ourselves. That’s pretty much the Gangly motto, I think, letting everyone be himself or herself.

Our world is very special. Maybe I’ll talk more about the girl’s room and classroom next week. The point is that we wanted to build a whole new world with characters that were fresh and different. Together I think we’ve achieved that.

Ofer Rubin is the Creative Director of Gangly Sister and the CEO and founder of RealEyez3D.

Are Beyonce and the Golden Globe awards “overly feminist”?Creating Purple