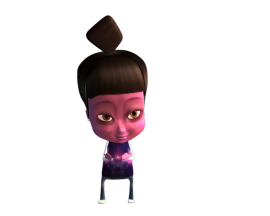 When we created Purple, obviously, we wanted to create a person of color, but we didn’t want to pin her down ethnically as to whether she was of Asian, African or maybe even South American descent.

I spent a lot of time studying different ethnic facial structures, and I think we’ve come up with a character who is accessible for girls from a lot of different races. The funniest thing is that some people have asked us “Which one is Purple and which one is Nine?” That means I did a great job on the skin tone, which, of course, is Purple, as you can see from the image here the development of the character as we built her.

The overarching challenge in creating the characters for Purple and Nine™ was in making characters that were cute but not cutesy, and interesting but not creepy. While Purple is a girl who is interested in science and technology, she isn’t awkward or geeky.

We actually discussed using 2D, but it just didn’t give us enough room to create something truly unique. Of course, everything starts out in 2D, as you can see from the strip on the right. It’s impossible to explain to anyone how the character will look in 3D based on the 2D form, so I found myself saying “It will all be fine. Trust me,” to the team. We work with a lot of trust at Gangly Sister.

Another major challenge was that the rest of the team come from different backgrounds. (Editor’s note: This is Ofer’s nice way of saying that we had no clue what we were talking about.)

It was important for me to get the team’s feedback and buy-in. At the same time, I couldn’t take into account everything that everybody wanted.

There was so much feedback about Purple’s hair, I’m going to write a separate blog post about it. I was astonished at how much people with hair think about their hair. But of course, I knew that what they were seeing in the sketches wasn’t how the final would look; so I had to work with the comments I got within the framework of the vision and how I knew the end-product would work.

As you can see from the character development here, I also don’t know a whole lot about fashion for girls. Fortunately, Maya was very clear about exactly how she wanted Purple to dress. I didn’t know there was specific terminology for “galaxy shirts”.

I treated the Gangly team more like customers than partners, I think, because I wanted to get the maximum feedback. I knew that as the artist and a senior partner, I could make whatever decision I wanted about the look and feel, but quite a bit of the feedback was valuable.

The funniest thing that went on was that the team would show the pictures to their daughters and tell me what the daughters think. In fact, I’m the only one on the team with a daughter in the target age group, and nobody ever asked me what she thought. It was hysterical that that this kept going on and nobody noticed the whole time, despite my enormous Facebook gallery of selfies with my kids.

I admit that I toyed with breaking just about every rule there is in 3D animation. Other animators notice that Purple and Nine have these weirdo simplified bodies and no fingers, just mittens. Obviously, this reduces our animation costs, which is important, but just as crucial is that it gives the girls a unique look.

If you want to do things right, there is a specific way of doing that, but then your characters tend to look just like every other 3D animation, and we didn’t want that. It’s absolutely essential that you know the rules, and I do, so when you break them, you get the results you want.

Gangly Sister has a grittier, more real feel about it than some of the other animation out there. That’s exactly what we are aiming for: characters that look great and are completely relatable. For us, imperfect is the new perfect.

Ofer Rubin is the Creative Director of Gangly Sister and the CEO and founder of RealEyez3D.

Creating NineWho are Purple and Nine