I can’t believe I’m a video producer, and neither can you. 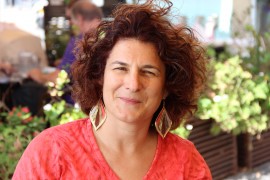 The ugliest thing about the ugly truth is that when you finally admit it, everyone around you responds “DUH! We already knew that.”

We don’t need to make a career change. Our career automatically changes, because the world changes, and our old skills are no longer relevant in our jobs. Learning new skills is always necessary, but it isn’t always pretty.

It’s not very beautiful video so far. The work I’m proudest of so far is several hours worth of instructional video showing the inside of people’s intestines, and not very good intestines, either: the kind with ulcers and polyps. Probably these videos will save someone’s life, but unless you are a doctor, I don’t recommend them.

What I do recommend are the interview videos I’ve been doing with female entrepreneurs, which are of significantly poorer quality. The content is fantastic, but you may have to put up with some fuzzy shots and poor angles, n0ne of which detracts from the content but all of which point to the ugly truth.

I am a very poor videographer.

You see, the reason I’m bad at it is that I don’t know what I’m doing.

Getting video done properly requires a lot of equipment, skill, patience and know-how, none of which I had several weeks ago. Now, several weeks later, I have a lot of equipment, some of which I’d never heard of prior to this venture. Did you know that there’s this special little level device you use to make sure your camera is straight? You did? Well, my daughter did anyway, because I am the only one who is totally ignorant about this, and I’m the CEO of this production company.

I interviewed 4 entrepreneurs last Friday in London, and not one of them knew half as much as I know about cloud computing, and some of them never will, yet they all have cloud-based technology platforms. How did it happen that so many of us know so little about what we are doing?

Cloud computing didn’t exist 20 years ago, and all of us are over 20.

The idea that individuals could broadcast video to the whole world was unfathomable 8 years ago.

A better paradigm is that in order to acquire mastery at something, you need to first conquer the basics and then make (and recover from) all of the obvious mistakes. I’m definitely on that path with our video! The sound was bad: needed a mic. One of the cameras didn’t have a jack for a mic: buy a new camera. The cuts were too rough: take video from multiple angles. Just seeing people talking is boring: add more visuals. Etc., etc.

The more potential mistakes you can make, the more time it takes to master a skill. We are content people, so we have mastery – meaning all of the interviews we do are fantastic, but we haven’t yet made enough mistakes to have excellent film quality. I figure we’ll reach excellence by the end of the winter.

You need to be a video producer. Yes, you,

My daughter had a course in cinematography during junior high school. At first, this struck me as odd. But, in fact, everyone should learn videography in junior high and high school, just like they learn composition. And they should definitely learn script writing. Because video is today’s composition.

Lots of people write blogs, but it’s not because that’s what the audience prefers. We write blogs because it’s a lot easier. This blog is taking me an hour to write and post. If I just wrote this on a piece of paper, read it into a video, edited the video, uploaded the video, etc, I might spend half a day on it. Ain’t nobody got time for that!

A lot of video is sub-par.

Am I allowed to say “sucks”? Some people are still offended by that terminology, so I’m just going to say that much video is of inferior quality. That’s because you can’t just pull out your smartphone and start rolling and expect greatness to emanate. The sound isn’t good enough, the angle isn’t wide enough, oh yeah, the screen portrait not landscape, and people don’t speak in sound bites. It takes a lot of work.

The video I produce is sub-par but I promise it will get better.

Fortunately, between myself and Miriam, we have the skills and connections to make good video content.

Even more fortunately, for Purple and Nine, we have an actual director (Ofer) and animator (working for cash, not credit).

The content is great because I have been interviewing people and writing content for 20 years, and although people don’t speak in sound bites, we spend a good deal of time editing out just the best parts for you.

Plus, we interview awesome people with a lot to say, so the garbage is pre-filtered by our choosing great people to interview.

When we started, we had thousands of dollars worth of photography equipment. We’ve easily dropped another thousand or two since starting, because whenever we see something’s not right, it always seems the solution is buying a microphone, tripod, special software, or other piece of equipment.

We’re getting better every day, so every week we’ll bring to you an interview even better than the week before. How about that?

What about you? Have you explored making your own videos? What’s your experience?