What are Purple and Nine Doing? 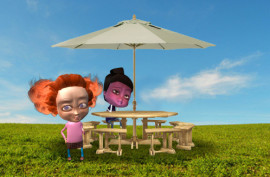 I’ve been so busy trying to add value for women in tech that I forgot — you follow Gangly Sister because you want to know about Gangly Sister!

Gangly Sister is moving from making video to making comic books for a number of reasons, mainly because it’s easier and more sustainable (read: makes enough money to sustain itself). The plots and themes are staying the same. In other words, Purple and Nine will be having adventures both at home and with their overseas friends. They’ll be trying to resolve difficult issues such as how to find a lost lunchbox, prevent their friends from falling asleep in class, and convincing the town council that it really is OK for kids to play outside in the dirt.

Purple and Nine will be using science and technology to solve their problems, and mostly the’ll experience a lot of failed experiments. Hey, it’s a comic book. It’s supposed to be funny. And it’s also supposed to be a little more like “real life” than having a superhero swoop in or solving your problems with a magic wand. .

In this blog you may notice that I’m a boring adult, but Purple and Nine have each started their own blogs on tumblr. Obviously, this was Nine’s idea. They’ll be blogging every Thursday, talking about different inventions that may or may not appear in the upcoming comic book series. Last week, Purple wrote about a new kind of hydroelectricity being used in Seattle, and the week before, Nine talked about technology solutions for autism to celebrate Autism Awareness Month.

This week, they started interviewing some of the inventors who made the cool stuff they are talking about, and as you can see in the picture, they’ve been trying out some of the items themselves. This is a solar powered umbrella invented because Michael Pelletz’ phone ran out of battery life just as he was in the middle of a conversation with his daughter Savannah. Purple will be interviewing Savannah in an upcoming blog.

In short, we’ve got lots of fun stuff planned for you in the coming month or two leading up to the release of the first Purple and Nine comic book! Stay tuned.

In the comments below, let us know what you want Purple and Nine to talk about in their blogs.

What to say this holiday season so as not to offend any religion…
December 28, 2015